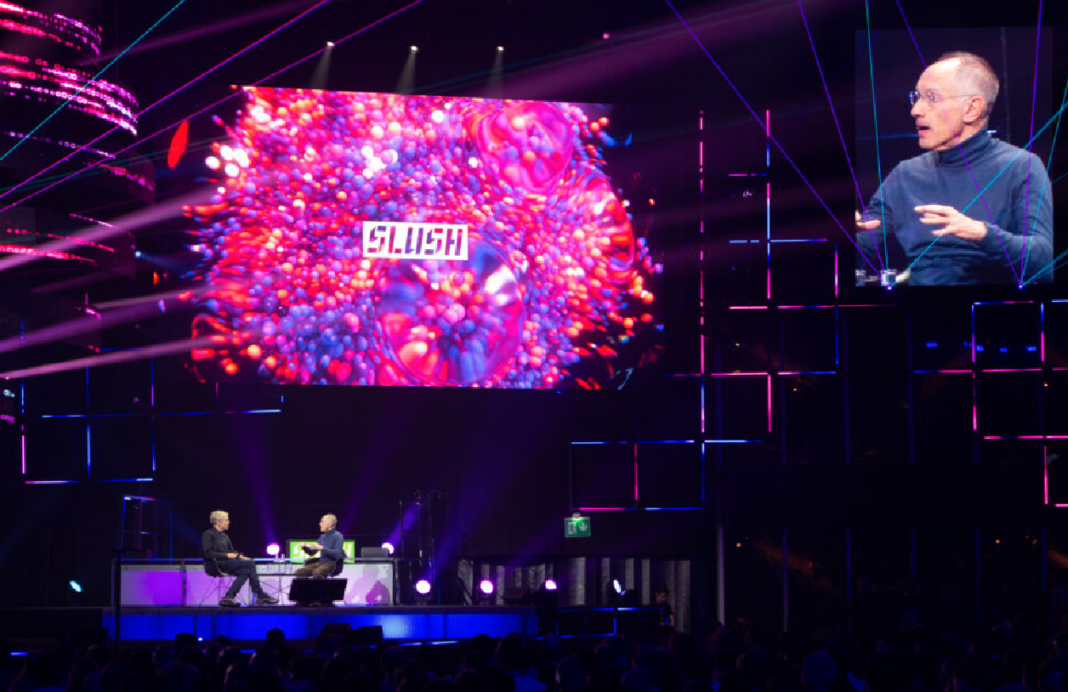 Every year Slush brings together the world’s tech elite to Helsinki. But for Finland the event has become so much more than just a start-up conference.

Big name founders, investors and tech enthusiasts from more than 100 countries will descend on Helsinki next month for Slush, one of Europe’s leading start-up conferences. Like many live events, Slush had to take a hiatus in 2020 due to the circumstances surrounding the Pandemic. But the event is back with aplomb for 2021 with a curated gathering of around 9’000 founders, investors, executives and media.

To see Slush today, a student-led operation and an integral part of the European tech eco-system, its’ easy to forget how remarkable it is that this evet was created in such a tiny Nordic country in the midst of an economic crisis. And it’s even easier to forget how the event, born in a dark time for so many local businesses, has helped shape Finland’s approach to entrepreneurship.

Over the past decade, the volunteer-powered start-up gathering has become a global tech accelerator; a breeding ground for a new wave of tech start-ups as well as a cultural event inspiring the next generation of founders.

Back in 2011, in the early days of Slush, Finland was reeling. The one dominant mobile phone maker Nokia was in freefall after being called a ‘burning platform’ by its own Chief Executive and was under assault from the Apple iPhone. The aftermath of the global recession was being felt on local industries and the country was heading towards a decade of lost growth.

A glimmer of light amidst the post-crisis gloom came from the formation of Aalto University in 2010, intended to boost innovation and company formation at the intersection of sciences, through the merger of Helsinki’s main busines, technological and arts & design universities.

The priority was creating a foundation for launching new businesses in a country that desperately needed them. And its student society for entrepreneurship would deliver on that goal through grassroots initiatives, including the creation of Slush.

The new university, combined with the urgency of an economy in the doldrums, became the foundation of Slush and has been applauded for bringing he onus of global tech to Finland much earlier than its European counterparts.

The explosive success of Rovio, hitting the big time around 2010 with the launch of its Angry Birds game, and Supercell, founded in 2010, was the lucky break Slush needed. This helped support the realisation of entrepreneurship as something ambitious and smart people do.

In 2013 Slush was attended by 7’000 people and quickly became a meeting point for start-up enthusiasts, first in the Nordics and later, globally. Silicon Valley investors soon followed, willingly flying into a cold and dark Helsinki to scout European tech.

Slush also happily coincided with a boom interest in European start-ups. Back in 2013 there was €5.2bn invested into European start-ups, according to Atomico’s State of European Tech report. By 2015 it was triple that and by 2018 it was nearly 5 times more at €23bn.

One of the biggest catalysts for Slush’s growth was the voluntary nature of it. A true grassroots initiative, first started from the AaltoED Student Union, snowballing on a larger scale. The top managers of Slush are student who abandon their studies for 2-3 years to work at the event around the year full-time, including satellite events in Asia. The team tends to change every two years and today, there’s a paid team of 50 students who work he event around the year. Average age is 25 and they are responsible for managing more than 2’000 students.

Slush itself can be defined as a growth company, and if you find yourself a part of the Slush movement and go on to your first start-up, your chances of success are pretty high.

Inspiring a country of entrepreneurs

Whilst it’s impossible to calculate the exact contribution made specifically by Slush, the event coincided with a global tech boom and a tidal wave of cheap capital helping accelerate two important shifts in Finland.

Firstly, Finnish tech companies have an easier time raising money today than when Slush first started. Inbound VC investment into Finland nearly quintupled to €188m between 2014 and 2018, according to the Finnish Venture Capital Association (FVCA). Not only is total investment up, but Finland ranks highest in Europe compared to other countries in VC investment as a percentage of GDP. There were approximately 2’000 investors attending the last Slush in 2019. In recent years, Finland has gone from laggard to European leader in terms of venture capital as a % of GDP. Source: Finnish Venture Capital Association.

Second, the event has contributed to profoundly changing the culture around starting companies. Slush has made it ok to be an entrepreneur in Finland and its now becoming a desirable career choice. Before the sea change, entrepreneurs worked mostly in their own silos without proper access to advice from seasoned founders nor foreign investors, never mind pitching competitions. The Slush volunteer program has exposed thousands of Finnish students to some of the biggest names in global tech and been a key transmitter of this emerging entrepreneurial spirit in Finland.

Today, 47% of secondary school students in Finland are mulling careers in entrepreneurship – a dramatic rise compared to just a few years ago. While a fifth of Finnish people under the age of 25 years believe they will start a company in the next three years, according to Global Entrepreneurship Monitor.

Between 2017 and 2018, Foreign venture capital investments grew by 58% and other foreign investments by 31 per cent year-on-year. Source: Finnish Venture Capital Association. The event has demystified entrepreneurship according to some who have worked at Slush. The start-up bug has reached academia as well. Now, even the professors who were categorically against the concept of entrepreneurship are excited about it and eager to create their own spin-offs.

A start-up ecosystem is only as strong as is companies. By that metric, Finland has seen an immense improvement in recent years. In the last ten years, the number of Finnish start-ups has grown by about 10 x and over the last three years, the quality has also improved.

Companies founded by ex-Slush employees: Blok, Wolt, Singa, Bou, thintesting, Nyxo, Carbo Culture, Fiksari, Work Ahead, Industryhack, Wave Ventures and Klok.
Other initiatives founded by Slush alumni: inkusiiv, a diversity and inclusion project, and Hello Ruby, a coding movement for women.
The new wave of Finnish companies have acquired a global mindset too, more so than many other markets. Whether or not it’s because of the Slush effect, a seismic change has definitely taken place over the past few years.

Some of Finland’s highest-flying tech companies today were founded by Slush insiders, known as the Slush Mafia in Finland. Wolt founded by Kuusi and former Slush execs raised $160m for pan-European expansion. Only this week, Slush proudly announced on LinkedIn that Door Dash had bought Wolt in a €7bn all-stock deal.

Kristo Ovsaka, a key figure behind the rise of AaltoES, is heading up Smartly – a global marketing automation platform with €63m in revenues pre-Pandemic. Other former Slush executives have set up companies such as Singa, a ‘Spotify for Karaoke’ and Blok, a digital real estate broker.

Whilst Finnish politicians first welcomed Slush as an enabler of entrepreneurial culture at best, a passing fad at worst, they have been forced to re-evaluate its impact. Slush is now the jewel in the political crown and a driving force that helps the Finnish economy gravitate towards a global and tech-focused mindset.

One of the most significant changes inspired by Slush is that Finland can develop a broader understanding for tech. One of the biggest impacts so far has been in Finland, where learnings, talent and capital are now circulating on an unprecedented scale.

At the heart of Slush, is a really tight-knit community of students, serial entrepreneurs, investors, founders, advisors and employees. Perhaps the building of this community is ultimately the most important achievement in this story – Slush is simply the by-product.

Aaron Michelin is a director of Tyson & Blake, a global and advisory investment firm whose purpose if to create a positive impact and long-term value for investors, companies and communities https://www.tysonblake.com

Michelin is also the founder of Corporatum OY, a Finnish based venture capital firm established in 1990. He is also the founder of Enersense International Oyj, a Nasdaq listed resource management company specializing in large scale projects and services in the field of energy, communication, digital products and industrial platforms with annual revenues of €200m. He is the Honorary Consul of Hungary in Finland. Aaron serves on many board of directors and act as mentor to many organizations that supports start-up companies with strategic advice and financing.