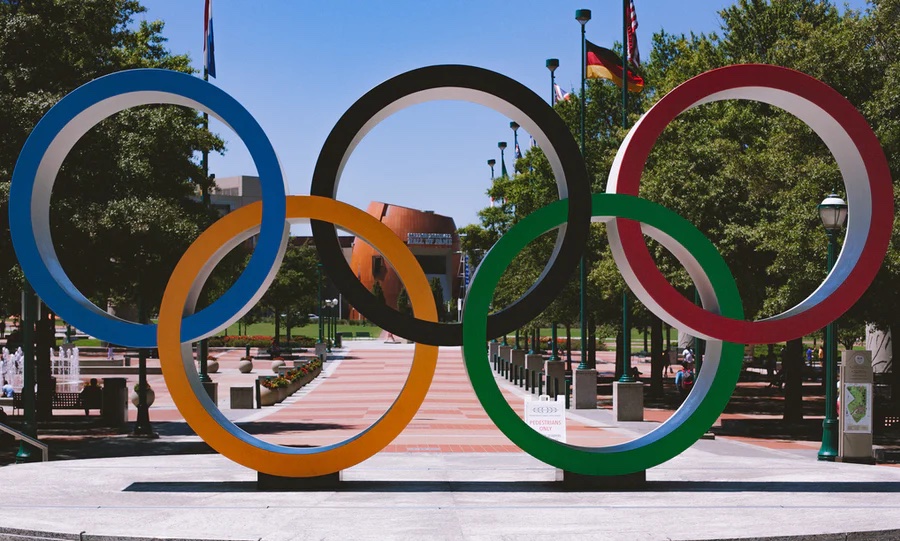 The Olympics is the world’s second most valuable sports event behind the Super Bowl, which means sponsoring the Games normally represents a transformational business opportunity for companies to boost their own brand value just by association.  When Covid-19 forced the postponement of Tokyo 2020, the financial prosperity of the Olympic juggernaut was rocked to its very core. It is impossible to say for certain what sponsors loss on return on investment will be, but for some of them it could be at least a 25-40% loss.

Before Tokyo 2020 finally got underway in Japan, international marketing activity around the Games was notably subdued. As the Olympic torch relay made its way through the Japanese prefecture of Yamanashi on a particularly overcast day in late June 2021, small smatterings of onlookers sporting face masks were pictured waving at the side of the road as the parade passed by. Trailing the torchbearer was a truck displaying the logo of soft drinks giant Coca-Cola, which is just one of many Games sponsors tied to an event that was very different to what they signed up for.

The party line might have been that these Games were going ahead for the benefit of the athletes and the watching world, but arguably the biggest motivation was to fulfil the billions of dollars’ worth of commercial contracts upon which the International Olympic Committee (IOC), and the broader Olympic movement, relies.

Sponsors, for their part, handed over hefty sums to secure the right to integrate the Olympic rings within their campaigns and products, as well as to promote themselves to the Games’ vast global audience. Most brands will have spent the previous 12 months upgrading and updating their campaigns to make them more relevant to the ‘new normal’ but there’s no denying that sponsors lost value in many different ways when Tokyo 2020 was postponed.

Of course, a cancellation would have been worse than a postponement, but brands still had to replan and reschedule most of their activities. Many had expensive media buys that they had to get back or renegotiate all going through a lot of negotiations to reduce the impact of the postponement.

Sponsors were forced into other significant compromises like considering the safety of their staff travelling to Japan. When overseas spectators were prohibited from attending, this further limited the opportunity for in-person engagement. Companies were unable to take advantage of their hospitality benefits to the extent that they would under normal circumstances.

Many of the grumblings in the build-up to Tokyo 2020 were voiced – privately, at least – by the domestic sponsors of the event, who collectively pitched in more than US$3 billion prior to the Covid-19 outbreak to secure themselves what was supposed to be a once-in-a-generation commercial opportunity. The Financial Times previously reported that some Japanese companies had called for a second delay of the Games so that more spectators would be able to attend, while others have purportedly brought in consultants to assess whether their association with the event will lead to brand damage.

But less was said about the members of The Olympic Partner (TOP) programme, a group of 14 blue-chip brands whose multi-Games contracts are worth hundreds of millions of dollars and together account for approximately 18 per cent of the IOC’s revenue. That is perhaps understandable, given that the worldwide partners have deals spanning several editions of the Olympics, meaning they have more reason to be accommodating than the domestic sponsors. It would also be fair to suggest that the Games’ Japanese partners were anxious about alienating consumers in their home market.

Pre-pandemic, Tokyo 2020 was extolled as a means to promote ‘brand Japan’ and to regain the country’s status as a global technology leader.  Instead, the Games became a liability for domestic sponsors seeking to distance themselves from the event who decided that the potential advertising benefits are outweighed by concerns of reputational damage.

Toyota Motors, whose multi-year contract with the Olympics is valued at almost $1 billion, were the first to announce that it wouldn’t air Olympic-themed television ads in Japan. It also said company president Akio Toyoda will skip the Opening Ceremony, despite the spectator-less event being open for VIPs like company executives and foreign dignitaries.

The 84-year-old carmaker scrapped its Olympic campaign in deference to the Games’ unpopularity among Japanese consumers. Toyota supported the Games and athletes via other means, such as providing electric vehicles for transportation during Tokyo 2020; its Olympic TV ads continued to run in other countries.

As the games opened, the event coincided with Tokyo’s fourth pandemic state of emergency with only 22% of Japanese citizens fully vaccinated. Critics of the decision to proceed with the Games say Japan’s prime minister, Yoshihide Suga, ignored medical advice and prioritised fiscal windfalls over public health.

Public sentiment turned against the Games before long before athletes departed for Tokyo. But their arrival revealed holes in the Games’ COVID protocols. 110 individuals linked to the Games tested positive for COVID, undercutting Suga’s promise to hold a “COVID-safe” Games and exacerbating worries that the weeks-long spectacle will turn into a super-spreader event.

The companies that cancelled executives’ appearances at the Game had to consider the poor optics. If their representatives appeared at an event that’s off-limits to ordinary fans amid a state of emergency that restricts movement, people in Japan would see it as a double standard. A ‘business as usual’ approach from sponsors would have been tone deaf and increased the narrative that sponsors are more concerned about protecting commercial opportunity than about protecting athletes. It was easier for a sponsor to simply not have their executives appear.

Saving face comes at a cost, however. Pulling ads or cancelling executive appearances diminishes the benefits a brand will derive from the pricey sponsorship contract it signed pre-pandemic. ‘Hospitality’ tickets for client schmoozing are one of the most integral benefits of sponsorship. They allow sponsors to “give VIP treatment to key targets, such as buyers, vendors and government officials.

At the top of the Olympic sponsorship pyramid is the ‘worldwide’ tier: multi-year contracts that span multiple Olympic Games. Only two Japanese firms, Toyota and Panasonic are on the list of thirteen companies. Toyota’s contract for instance, is valued at nearly $1 billion and extends to 2025. Some say that long-term sponsors could still stand to gain. Reimbursements are unlikely to be written into contracts but rolling the investment into support for the next Games is more probable.

However, the majority of the domestic firms that ploughed money into the Tokyo Games were ‘gold’ sponsors, meaning their Olympic affiliation only applies to the 2020 (now 2021) event. An oft-cited price tag for these contracts is at least $100 million.While the terms of each sponsorship vary, a basic package would include association with the Olympic brand. This means brands can use the word ‘Olympics’ and the logos and imagery synonymous with the Games for physical and digital advertisements and social media marketing campaigns. Sponsors are also allotted a certain number of ‘hospitality’ tickets, to be used for ticket giveaways and to entertain clients. Extra add-ons include options like TV spots, which gold sponsors like Nippon Life Insurance have opted for.

A one-off association means that the 15 Japanese gold sponsors including the likes of Asahi Breweries, sportswear brand Asics, and financial group Nomura—will miss out on the usual basket of perks with no chance of recapturing benefits at future events.

The pictures from Tokyo were inevitably at odds with the images of sold-out stadiums that typified previous editions of the Games, but were the overwhelming majority of the global population still engaging with the event either on television or via a digital device?  Comparisons with previous Olympic Games are imperfect given the different times zones, the pandemic and fewer streaming options in the past. The Tokyo events, delayed a year due to the global health crisis, were held without spectators and offered less of the usual spectacle.

In Japan, TV viewership for the opening ceremony of the Tokyo Olympics averaged 56.4% in the capital and its surrounding areas, the highest for the event since the previous Tokyo Olympics in 1964.  NHK’s live broadcast of the ceremony, held in the spectator-less National Stadium in the Kanto eclipsed the 47.9% for the 1984 Los Angeles Games and drew near the all-time high of 61.2% for the previous Tokyo Games opening ceremony.

An estimated 73.27 million people across Japan, which has a population of about 125 million, tuned in to NHK and other channels to watch the opening ceremony. The nearly four-hour event was the most viewed event in the last 10 years in the country, said Yiannis Exarchos, CEO of Olympic Broadcasting Services.

He has also declared that “more than 80% of all Japanese people have watched some part of the games and that engagement on digital platforms is at a record-high level. Of course, the figures were very much aided by the success of the Japanese athletes in the medals table.

The BBC saw their peak television audience drop by more than half during the Tokyo 2020 Olympics.Only 36.4m tuned in to watch coverage over the course of three weeks, making it the least watched Olympics compared with the previous three, and the audience for the blue-riband 100m event drew significantly fewer than the 11.1 million who tuned in to watch cyclist Jason Kenny claim gold in the Rio 2016 final. The total is also a significant drop-off from the 45.24m who watched the last Olympics in Brazil, which attracted a record television audience for an overseas Games.  It was considerably lower than the 51.9m who tuned into at least 15 minutes of the 2012 London Olympics.

The eight-hour time difference in Japan, which meant much of the action took place overnight, can be partly attributed to the fall in numbers, although Tokyo marked the end of the BBC’s longstanding history of wall-to-wall coverage.

Viewership in the US dropped to about half the audience for the London Games in 2012. The 17-day event averaged 15.5 million primetime viewers on the NBC broadcast network and digital platforms including the Peacock streaming service, the company said in a statement. That represented the smallest audience for the Summer Games since NBC began broadcasting them in 1988.

The total slumped below the 31.1 million viewers who watched the Summer Olympics in London via TV and online outlets, and 26.7 million who tuned in for the 2016 Games in Rio de Janeiro.