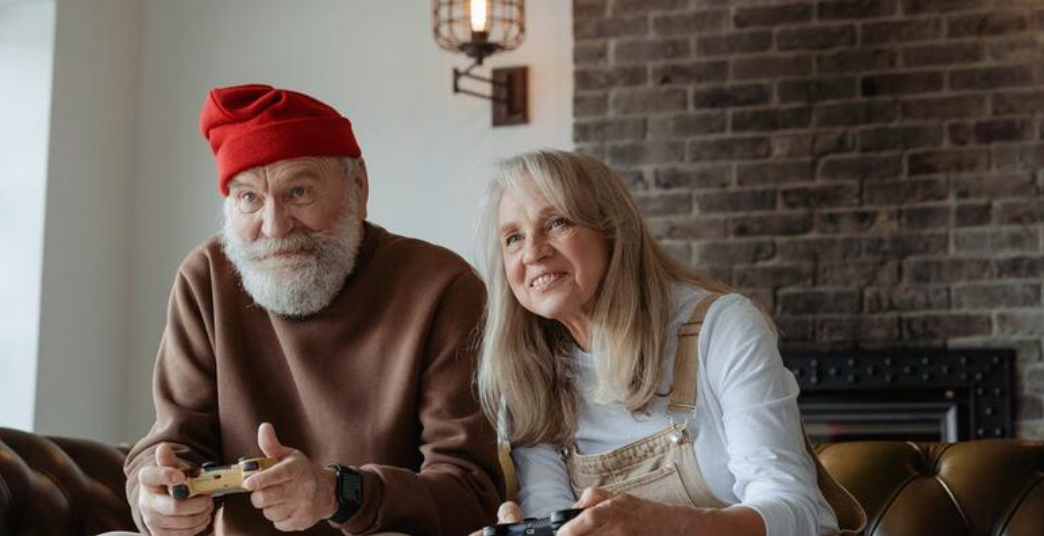 Anyone who has ever been to Gamescom or any other gaming show will immediately be hit with the notion that game developers have a homogeneous target age group.

But if you think that gaming is exclusively for youngsters and something that boomers and pre-boomers shake their heads at, you couldn’t be more wrong. In fact, the number of over-50s gamers has now overtaken the under-20s. Of the 34.4 million who played at least occasionally in 2020, 10.8 million were over 50. By contrast, only 8 million were under 20. So who are these mysterious gaming pensioners?

In 2014, the average age of a gamer was 31, today it is 37. Along with the population as a whole, players are also getting older. There are two simple explanations for this. Those who “grew up” with games in the 80s and 90s simply stuck with them and the medium has evolved together with its consumers. Or, gaming PCs and consoles moved from children’s rooms into student digs, homes and even into the break rooms of many companies.

Today, anyone 30 or 40 years old and identifies as a gamer no longer has to fear being considered an oddball. In fact, numerous game series have survived the decades and are now revered almost cult-like. The Legend of Zelda, Final Fantasy, Metal Gear and Resident Evil still regularly produce successful sequels or reinvent old classics in the form of remakes. And even if the finished product does not lead to mass enthusiasm from all fans (I’m looking at you Final Fantasy VII Remake!) it is nevertheless significant that there is a keen demand to try it.
But that alone doesn’t explain the rapid increase in age; after all, there are plenty of young players growing up. So there must also be people who, even without nostalgic childhood memories, suddenly reach for gaming platforms. There is also a reason for this – or rather two…smartphones and tablets.

While PCs and consoles are expensive on the one hand, and not always easy to use on the other, mobile devices have now found their way into many senior citizens’ handbags, shirt pockets and trouser pockets.

Mobile games are usually easy to install, easy to use and cost much less than their “big” siblings on PCs and consoles. So today, a much larger group of people has at least the potential to access the market. The International Computer Science Institute in Berkeley found out that digital versions of actual analogue games (Skat, Chess, Sudoku) are most popular among seniors. So while grandma used to play chess with her friends at the kitchen table or grandpa went to the pub to play skat (say hello to the 1950s), today they play on their smartphones.

And even if this explains only a relatively small part of the increase in the number of senior gamers, the Nintendo Wii also graces many a TV room in retirement homes today. The innovative motion control is easy to learn, fun and keeps you fit. The health industry has also recognised this and has been researching so-called “health games”, i.e. games with a therapeutic effect, for some time. Even the renowned Hans Basedow Institute is now researching this topic. However, the focus is not only on senior citizens. The institute is generally concerned with demonstrating the potential of games for health promotion. This includes games that aim to maintain or even increase physical fitness as well as games that impart health-related knowledge. Wouldn’t it be practical if surgeons could be trained or educated in a simulator in the future? – No problem! And I’m not talking about the Surgeon Simulator, which is entertaining but probably not suitable for doctors, but about realistic medical and surgical simulation. Apart from medicine, numerous industries have also recognised this potential and use games and the know-how of game developers to find solutions to problems. One particularly noteworthy project is called MiKompanion and aims to take away the fear of treatment for children with cancer through augmented reality. Even before the start of therapy, they can playfully deal with the aspects of radiation therapy in a virtual environment. The potential of games here is seemingly endless and far from exhausted.

The Fusion Campus, which was founded in June 2021 and is based in Düsseldorf, deals with precisely this topic, i.e. with the question of how gaming know-how can be used in other industries. Managing Director Stefanie Waschk, who is already well-known in the gaming industry, describes her work at Fusion Campus as follows:

“The medium of gaming has, as they say, “arrived in the middle of society”. Not only has the possibility of location-independent playability on mobile devices increased its presence in everyday life, more and more the mechanisms contained in the game are also moving into our focus. Aspects such as motivation, challenge, ambition, self-realisation, feedback/reward and curiosity are also important for companies in other sectors of the economy. After all, these mechanisms stand for the virtues that enable change and that can demand and promote a (necessary) transformation process and innovation in the economy. Knowledge from many fields, including the psychology of learning and the cognitive sciences, is used here. The set of rules of a game, sets the basis for the necessary knowledge and competence building. In many cases, this is only possible if players not only act on their own responsibility, but also collaboratively or with the support of others. The correlation to the organisational context arises.

It is not only these aspects that make games so interesting outside the gaming industry. Games make use of advanced technologies, analyse user behaviour and (especially in the online gaming sector) are geared towards continuous development on the basis of the data information they receive – a foundation of modern customer centricity.

In summary, games are not only highly technologised, but above all innovative, creative, user-oriented and capable of building and motivating networks; they stand for development, change and progress. And that is exactly what makes them so interesting for business, science & research and politics. For this reason, it is our concern to bring the different players together with the Fusion Campus and to actively support them in order to make use of these potentials.”
But what are the takeouts from this? Whether young or old, regardless of gender, whether on PC, console or smartphone – almost everyone can play games nowadays.